The AFC in Leamington 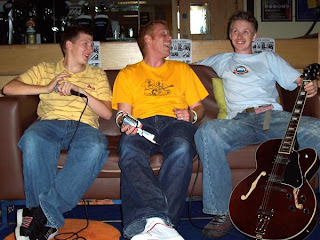 The Austin Francis Connection was first conceived in 2003. That seems an awfully long time ago, and now that we're here in 2013, the trio have decided that enough's enough and to call time on their time together.
There are many reasons for this - Edi's work, Mark's new family commitments, Hobbit's solo career... But when it all boils down to it - it's just the right time. Finishing at the end of the summer, The AFC have gone on longer than they ever previously considered (much like Edi's song introductions!) and are truly grateful to all those who've been to shows, bought mugs & CDs, or just laughed along with their tunes. The boys will continue to play a variety of shows throughout the spring & summer, but will be finishing off with a bang at the end of summer 2013 – 10 years after they first got together. So if you get the chance to see them live? Catch them while you still can! 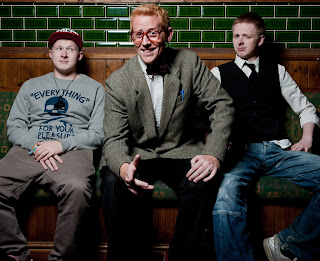 From gigs to 5 people, all the way to capacity crowds, from gigs on a bus to festival main stages – it’s been quite a journey, and one that never seemed thinkable when they first got together in a box room at Hobbit’s house to go through some ideas for a couple of songs to play at an open mic night. There have been far too many people who have been important and indeed crucial in The AFC getting where they got....our families are far too obvious and they have been massive supporters for us all, but here’s a few other key people and the reasons why.

1. Piers Williamson – The man who started this whole thing going. He asked Edi to record a solo EP having seen something positive in him when they met at a recording studio in Bristol when Edi was still in his previous band. Piers ended up hosting all three of the band at his home while they recorded with him their first set of songs which eventually became their first EP “A Bit of a Shambles” as well as helping record “All At The Same Time” – their 2007 live recording. One of the nicest, loveliest men you could ever wish to meet, Piers has since moved back down south where they understand a bit more his “hot water” drink of choice a whole lot more than we ever did.

2. Anthony Harper – A name that not many know. But someone whose friendship, stewardship, and encouragement for The AFC has always been there and has always been appreciated by the guys. Anthony was the manager of SomethingAboutNothing and is currently managing Superhero. A Giant amongst men -Anthony H.... We Salute You!!

3. Dweeb – OK, not strictly one person, but 4 fabulous people : Matt, Tim, BMan &; Dave. They have 4 lovely other halves; Sarah, Jo, Jen & Jacqui. Every single one of them has been nice to us every time we’ve ever met up! They’ve been a group we’ve seen in various different places as gigging bands who bump into one another in different locations, and we’ve always had great fun together. They’ve asked us to play their events which have always been a pleasure, and we’ve had both Bman and Dave step in & play when Mark & Hobbit have been unavailable!... Such genuine people – we’ll really miss crossing paths with you. 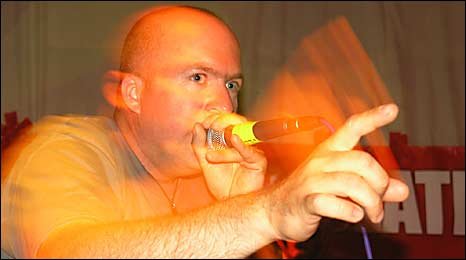 4. Gavin Tyte – Another man without whom this Shambles would not have existed. If Tyte had not been beatboxing at the school assembly I was in (as a teacher – not THAT long ago!) then I would never have got into beatboxing, never have thought of getting beatboxers to the Hiphop night at Greenbelt, and would have never have met Hobbit. A legend in UK Beatbox, he was a huge supporter of the band in the early days and is a role model for anyone involved in music and how to carry themselves – a true gent.

5. Rich Green – Many people have claimed to be The AFC’s biggest fan.... I’m sorry to tell you this, but you’re not.....Rich is. Rich has spent more time helping us hand out flyers, put up posters, sell cds, organise signings, even find stools to sit on at gigs than anyone else (and I include members of the actual band in that statement!!) and deserves his title. Yet again, he will no doubt work out his work shifts at Greenbelt according to when we’re playing, and we will miss such dedication and devotion from people who we acknowledge are the truest of true fans.


So many many many people we could talk about, but safe to say that you will be missed within our lives and we will look back with huge fondness over the last 10 years as we move on & elsewhere. We are grateful to have been able to play gigs for this long and have people still like us. We are proud to have done everything through ourselves rather than meeting other people’s ideas & plans. And ultimately? We’re going out while we’re still good – with a bang!!

Very sad to here you're ending the AFC, however you have been immortilised by your incredible music, the everybody knows dave dance-which works with any song ever, I think of you wherever and whenever tea is drunk, a joy to watch, a pleasure to listen, see you at greenbelt, God bless